The final book in the Fireborn Wolves Trilogy, VENGEANCE is now available for preorder. 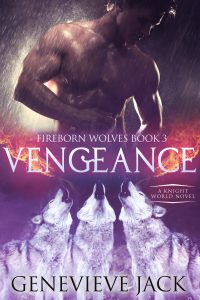 The difference between a bad day and an exceptionally bad day could be solely determined by the quality of one’s coffee. Silas Flynn’s lips twisted, his cheeks puckering at the semi-tepid bean water trickling down his throat. He managed a swallow, only to have a long, cinnamon-tainted finish burn on the way down. Humans.

He could always tell when one of the nonsupernaturals working with him in the Carlton City Police Department made the coffee. The shit was weak, barely discernible from tea, and weirdly flavored. He swirled it in his cup. The concoction was so thin he could see the crack at the bottom of his favorite mug—the one with the dachshund on the side that said Don’t be a Weiner. The crack, which probably harbored all sorts of nasty bacteria, was a grim reminder that he should have replaced the thing months ago, a fact he could have ignored one more day if the coffee had been brewed correctly.

He looked both ways before dumping the pot down the little sink in the break room. In the CCPD, supernaturals and humans worked side by side, although the latter were unaware that their coworkers sprouted tails or cast spells during their time off. Human detectives were assigned to human cases; Silas, as the only supernatural detective in the department, was assigned to supernatural ones. There were more humans than supers, in the same proportion as the city’s population. And with the local demigoddess witch, aka Hecate, Grateful Knight, also policing the supernatural community in the area (at least when it came to supernatural involvement with humans), he usually had no problem keeping up.

Silas liked humans, for the most part. His best friend, Logan, used to be human. But he was glad his captain was fae. Made it easier on everyone when he needed accommodations for his condition, namely three days off a month to shift into a werewolf.

“What the hell? I thought Wendy said she brewed a new pot. Someone drank it all already?” A woman Silas had never seen before stood in the doorway to the break room looking peeved, an obscenely large mug dangling from her fingers. The thing was practically a soup bowl with a handle. His werewolf nose twitched as his supernatural olfactory senses sorted out her scent. Coffee grounds, coconut hair conditioner, generic dryer sheets, a crumb of orange vanilla scone that clung to her shirt, and an undercurrent of something gamey and wild.

His inner wolf roused behind his skin, and Silas drew a deeper breath. He had the strongest urge to bury his nose in her hair. Tall, with an athletic physique, she sported blue jeans, low-heeled boots, and a white cotton blouse. She was square-jawed and solid-boned, but it was her deep red hair that fascinated his wolf, the unusual color catching the light and toying with his senses.

Silas cleared his throat, both embarrassed and shocked to catch himself staring. “Did Wendy send you back here?” he asked. “This is the employee break area. There’s a separate coffee station up front for the public.” He pointed out the door. “Although, if you hang out for a minute, I can fill you up.” Fill you up? What was that about? Goddess he sounded like an idiot.

She folded her arms across her chest, one side of her mouth lifting. “He didn’t tell you.”

After shaking her hand tentatively, he gave his palm a good sniff under the guise of scratching his whiskers. The gamey scent was evident. His wolf practically leapt inside his psyche. Not human, but not wolf. For the life of him, he couldn’t quite place what she was, although, usually, he excelled at discerning supernaturals.

“Is this the part where you try to smell my butt?” she asked. “I heard you werewolves were into that.” Shocked speechless, Silas’s jaw popped open. Meredith laughed. “No offense. I was just breaking the ice. I’m bispecies. Dad’s a werewolf. Mom’s a skinwalker.”

“Whenever I get the urge, and only into a fox.” She smiled again, this time flashing a few beautifully symmetrical teeth.

“Interesting.” Silas turned to the sink and began filling the pot. He’d heard they might need another supernatural officer, although he was surprised she was in plain clothes. Maybe a secretary? “So, what exactly will you be doing here at the CCPD?”

She hesitated, her eyes widening as a slow groan vibrated her closed lips. “Maybe Patrick is the right person to tell you.”

Silas snorted. “Why? What’s the big deal? Is it some supersecret new role I’m not supposed to know about?”

“I’m a transfer from Merrimack… where I was a detective.”

Silas paused, the spoon he’d used to shovel in the coffee grounds hanging over the paper filter. “Detective? What will you be doing here?” He snapped the lid closed and punched the brew button with his finger before pinning her with a questioning stare.

She lifted her shoulders toward her ears, her fingers intertwined at her waist. “I’m your new partner.”